I am so excited to tell you how the first several weeks in Denton have gone. The time is flying! It has been so busy meeting students on campus. Our first day going out on campus the leader team met at my friend Reagenn's house to prepare for the year and welcome week. There were so many student leaders there that we could barely all fit in the same room, almost forty. After that we went out to campus to have lunch with any students on campus. It was so encouraging to see people put themselves out of their comfort zone for their love of Jesus and their love for others. Here is a picture of the leader team at our meeting right before welcome week. 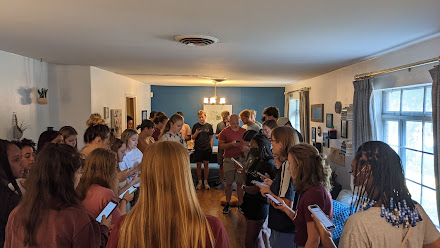 So many freshman on campus were looking for something to do the week before classes. Not knowing people and coming out of a pandemic made students even more eager to find friends, something to be a part of, and something fun to do. Having conversation with people and inviting them to things was so easy.
One of our most anticipated events that we put on to invite people we had been meeting was Capture the flag which was supposed to be on Wednesday night but was rained out. So, instead we moved inside and played one of the most fun games of zombie tag I have ever played. We probably had close to sixty or seventy students there and many had brought their friends! One of the guys that I met brought his friend Isaac who I invited to our small group. Isaac came to the first core, was open in his sharing and honest about how he doesn't know much scripture. After core (small group) we announced that FOCUS offers 1 on 1 bible studies with anyone that is interested. Isaac mentioned that he wanted to do it! This past week Isaac and I started our study and we learned a lot about each other and our beliefs. I am so excited to continue to meet with him weekly as we grow our friendship and discover scripture!! Here is a picture of the zombie tag event. 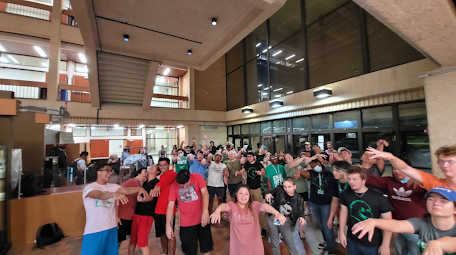 Earlier in the week I was hanging out with Isaac and we were playing pool on campus. As we left where we were playing we ran into one of his friends and had a short conversation with him. Isaac mentioned how much fun we had at zombie tag awhile back and invited him to come play the next time we do it. He really encouraged him to come and told him that he would text him about it. Getting to see this play out in front of me was sweet because I knew that I was watching the process of community form and already getting to see people being reached by the person I was reaching out to. This is just a small glimpse of what the start of discipleship can look like and was super exciting!
Now that we are two weeks in we aren't doing welcome week events anymore. We have invited everyone that we met through those events to our large group meetings (TNF) and cores. Seeing how full the room was the first night we had TNF made it clear to me that our student leaders and ministers were being faithful to reach the campus while the ripe was harvest. Here is a picture of our large group meeting our first night. 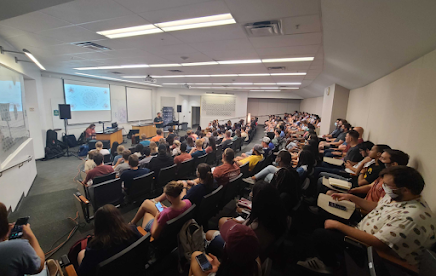 Thank you so much for partnering with me in ministry! Your support makes it possible for me to be on campus in Denton working to help make Jesus known. I hope that this was encouraging for you to hear and would love to hear any encouraging stories you might have. If you could be praying for the consistency of our students as classes become more demanding and for nobody to get overlooked when reaching to people that would be really appreciated.
Matthew 9:35-38 Then he said to his disciples, “The harvest is plentiful, but the laborers are few
Thank you,
Cole

Popular posts from this blog

Halfway through the year! 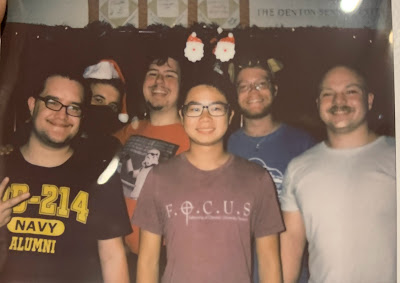 Hello Friends, Family, Fans, and Supporters!!       It is so crazy to me that the apprenticeship and this year of ministry is halfway through. It feels like so much has happened so far. From reading the Old Testament, to settling into Denton, building friendships, and giving my first sermon. The Work that God has done in my life over the last five months has been incredible and makes me excited to jump into this next semester. Thank you so much for your support in ministry through prayer and finances! The things that I am learning through scripture, classes, and people are irreplaceable and have already made a large impact on the way I think about God, the church, scripture, and being a disciple. I can't thank you enough for your support.   Praise God for His faithfulness and the ways that he works!      Our God is a very personal and relational God. He consistently meets people where they are at so that they can experience relationship with him and life to the full. God knew we we
Read more

What God Did This Year 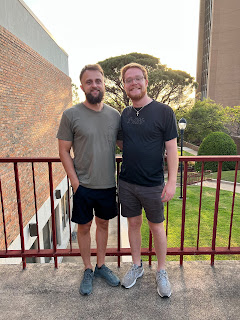 Hey,     The year has come to a close and there is so much that has happened recently and throughout the whole year that I want to tell you about. God has taught me and others through me a lot this year. I am honored to have been able to do this apprenticeship and to be believed in by so many people that trusted me to learn and share Jesus with people. Thank you so much for your generosity! It allowed me to do this and God used it to show me things about myself, things about him, and things about community. Thank you all so much for your prayers and for investing in my life in whatever ways that you have. Ryan my mentor has been a great friend and leader for me this year, I have learned so much from him. God has used him a lot to show me grace and patience while wanting what is better for me.     There is a lot I want to say about what I have learned this year and what all has happened but I will try to keep it short and use as much pictures as I can. Thankfully one of our last assign
Read more